The Individual Artist Fellowship is a $5,000 unrestricted award to acknowledge and encourage the careers of established, professional Utah artists who are demonstrating exceptional creativity in the performing and visual arts. Eight fellows — four in performing arts and four in visual arts — will be selected to receive the fellowship award.

Performing arts disciplines will rotate every three years between dance, music, and theatre. This year will focus on dance applicants.

Artists practicing in visual arts media such as painting, drawing, printmaking, photography, sculpture, craft, installation, traditional arts, and new genres are eligible. New genres include video, sound, performance, and other media-based arts. Visual art must be a primary, significant, and integral component of the media. 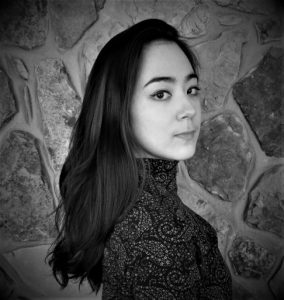 Sarah McCaffery is Manager of Interdisciplinary Arts at Asia Society Museum, New York. She oversees a diverse portfolio of art projects, including participatory performances, site-specific works, durational performance art, and immersive sound installations. Her projects include producing a virtual performance season as part of Asia Society’s inaugural Triennial and “Creative Common Ground,” an initiative that commissioned artists to create interdisciplinary performance works. She has worked with numerous artists from Asia and the Asian diaspora including anGie Seah, Melati Suryodarmo, Samita Sinha, and Susie Ibarra. For Asia Society’s first virtual season in 2020, she curated programming on the role of the arts and intersectionality in social transformation, featuring change makers from various disciplines including Ananya Chatterjea, Margo Okazawa-Rey, Nadine Naber, and Scott Kurashige.

McCaffery’s intercultural and interdisciplinary approach is shaped by her extensive background in the artistic process, including dance pedagogy, choreography, and performance. She has trained and performed in multiple dance styles, including ballet and contemporary dance. Formative to her movement philosophy was her training at the Dance Theatre of Harlem, where she studied the body as site for rebellion, and the idea of dance as embodied liberation and power. McCaffery is active in cultural organizing and has participated in the Asia Art Archive in America’s Leadership program and the Association for Performing Arts Professionals’ Emerging Leaders Institute. She is pursuing an M.A. in art history at Hunter College, with a focus on performance and curatorial studies. As part of her program, she participated in a curatorial intensive led by the curator Koyo Kouoh at Raw Material Company, an arts center in Dakar, Senegal. She earned her B.A. from Duke University in political science, dance, and markets and management studies. Evan Garza is a Washington, DC-based curator, writer, and critic. From 2016–2019, he was Director of Public Art at Rice University in Houston, Texas, where he oversaw a collection of more than 25 major public artworks, including the James Turrell “Twilight Epiphany” Skyspace, a Houston landmark. In 2019, Garza secured major acquisitions of work by Sol LeWitt and the first permanent campus artwork by a woman in Rice's history, a bronze sculpture by Ursula von Rydingsvard. As Director, he organized experimental sound and performance works at the Skyspace and curated exhibitions and installations by Nina Katchadourian, Erika Blumenfeld, and Jarrod Beck.

Previously, Garza served as Assistant Curator of Modern and Contemporary Art at the Blanton Museum of Art at the University of Texas at Austin from 2014–2016, where he was managing curator of the exhibitions "Warhol By the Book," "Come as You Are: Art of the 1990s" (2016), and "WITNESS: Art and Civil Rights in the Sixties" (2015), and where he helped lead a two-year comprehensive modern and contemporary collection reinstallation with curator Veronica Roberts. From 2011–2014, he simultaneously served as Co-founder and Assistant Director of Fire Island Artist Residency (FIAR), a New York nonprofit and the first residency program in the world exclusively for LGBTQ+ artists, and Exhibitions and Public Programs Director at the School of the Museum of Fine Arts, Boston. In 2013, he was the recipient of an Hablar en Arte curatorial research fellowship in Madrid and was appointed to the Boston Art Commission by Mayor Marty Walsh, a discretionary appointment for distinguished service in the arts, where he served as commissioner until late 2014.

Over the last fifteen years, Garza has curated several exhibitions nationally. His writing has been published in several books, catalogues, and monographs, and by The Drawing Center, Flash Art, Art Papers, and Artforum.com. He has given public lectures and served as visiting critic and guest speaker at CCA Wattis Institute for Contemporary Arts, ICA/Boston, MIT, and Harvard University, among many other institutions. Garza currently serves as visiting critic and adjunct graduate faculty in the Department of Painting + Printmaking at Virginia Commonwealth University School of the Arts (VCUarts).

All fellowship applicants will be invited to participate in two professional development online workshops. These workshops will offer training and career preparation to build and maintain a thriving artistic practice.

What can I deduct? Do I bring receipts to my accountant? Is my art a business or a hobby? What is a Schedule C? How do I deduct my home studio?  Why do freelancers have to pay taxes quarterly, and how do I do that? Hannah Cole is a tax expert who specializes in working with creative businesses and artists. A long-time working artist with a high-level exhibition history, and a tax and money columnist for the art blog Hyperallergic, the financial challenges of freelancers and small creative businesses are both relevant and personal to Hannah. She will discuss the basic tax equation, self employment tax and the estimated quarterly tax system, audit concerns for the creative person, and other tax issues specifically relevant to artists and makers, followed by a question and answer period. Hannah Cole is the founder of Sunlight Tax, which specializes in friendly, informative tax preparation for artists, and engaging, art-world savvy tax education workshops for artist groups.

This workshop will be held on May 6, 12 PM - 2 PM. Invitation will be sent out to applicants upon submitting their fellowship application.

Additional workshops to be announced soon.